In the Frederick Layton Gallery, propped up on a small shelf a couple of well-worn sketch books atypically invite peering. They appear weightless, floating with the levity of their contents. Next to them, a 11×17 or so framed movie style poster reads The Peeling, in thin modern san serif script, set on a putrid green gradient background ascending to off-tan.

As if chosen from a casting call staged in Danaya Khartcheko’s sketch book, a particularly oxymoron-ironic character plucked from an audition line of seductive to absurd beta anime illustrations poses shyly in the center of the poster, thick spiraled horns draping downward like pig tails, big innocent eyes gaping. It’s Twiggy. She’s the star of Khartcheko‘s animated mini-drama playing on a nearby flat screen.

Ripe Banana, opposite Twiggy in The Peeling, menacing, intensely yellow and obese, sits onerously on a table grimacing and grumbling. I’m fighting hard to continue discerning the plot, I think I am hallucinating at this point, but as I recall a powerful dandy of a man chose Ripe Banana as an ingredient for his next dessert. Twiggy, taken by the dandy’s influence, must do the peeling honors while the he engages in other worldly fancies.

Compelled and ready for action, Twiggy maintains her demure temperament a few unsuspecting moments before springing to the table, confronting Ripe Banana with a swift chomp to the skin. In the end, picking its own time to go, Ripe Banana gets peeled, smelly and wasted.

Short and enjoyable, Khartchenko’s animated piece falls somewhere between National Film Board of Canada and Tim Burton stylistically and tells a dark but humorous story accompanied by rhythms from The Scissors Sisters, proving traditional animation techniques are well worth staying around. Series in the making? Let’s hope so.

The closing of MIAD’s 2012 Juried Senior Thesis Exhibition coincided with the 25th Anniversary of Gallery Night in Milwaukee.

Note: This video has not been altered and is shot in real time… Manual Controller doing some live spastism unreal. The Salutations album broke after two years in the making, constructed with all live hardware applications of digital composition.

Manual Controller, Salutations is available for purchase through some unknown alien being.

People trickle in and out of Orcanine Abbey‘s most recent open studio, checking out Rachel Sutter-Smith‘s set of provocative illustrations depicting personages both fantastic and realistic; conceivably a few self-portraits delving into the depths of her own inner most spaces. A dude listlessly sits in an a brown high back chair waiting for what’s next.

A handful of unheroic but reasonably cool looking kids have exuded a practical chemistry that usually can being felt among good friends. In good spirits, they enjoy the stellar performance of two piece band Pepe le Moko warming up the jerry-rigged stage. Episodically creepy yet blissful strumming done, these reasonably cool kids Sally, Sam, John and Lars that happen to be from Worcester, Ma, take up musical arms and crank up some major throwback post hoc garage/art rock mania as Secret Lover.

Under a dim oozing red light, the front woman calls out “Poison Ivy”, her cue to her band mates to let the gear rip into a raucous fury that soon animates the listless dude to his feet for a better vantage point. Not playing nice, the drum lead (Sam) crashes his symbol to the floor several times, and the guitarist (John) snaps two guitar strings banging out riffs for Sally‘s volcanic pipes to drift upon heralding exuberant tributes to life and youth, with Lars consistently throbbing the low end. Seriously smashing.

Secret Lover is a downright nice kick-in-the-ass and they’re touring tonite in Seattle at The Kraken, in Phoenix at the Trunk Space July 21, and in Houston at Super Happy Fun Land July 25.

The digital/electronic music spectrum has a fairly large amplitude that crests with pop-corny sound synths’ endemic to Owl City tracks, hits a solid plane with mainstays like the Gorillaz, and sweeps to another phase of under-pop experimentation with a local debut release entitled Salutations, by digital impresario Manual Controller.

A varied tempo ode to the glory ages of pre- hip-hop composed electronica, Salutations hits ambient realms with shades of dub on tracks Recessional Processional and Id and ignites a fist-full of freaking sparklers with hyper-synchronized and stylish tracks Gentleman in a Hat and Anthemis Colors.

Bringing an ethic back to the genre lost in the Scratch Live era, Manual Controller’s makes a habit of minimizing his use of digital software aids for arrangement and mastering by playing much of his instrumentation live, recording individual devices through a series of 1/4″ patch cables connecting to a multi-jack monitor. Imagine an American Bell call operator wearing an helmet seeming of some historical significance, surrounded by an arsenal of intense music equipment, and your pixelated view of the spectacle that Manual Controller manifests becomes a little crisper.

Befitting the growing appetite for electronic music in Milwaukee cultivated by events like WMSE‘s 414Melt and shown by the great reception Teisto got at Summerfest, Manual Controller will brandish his newly pressed compact disc on top of a live performance at Stonefly Brewery Thursday July 19th at 7p, after Stonefly’s notoriously bearable dinner time. In the mean time, you can test drive the album or get the whole schwabang on Bandcamp. 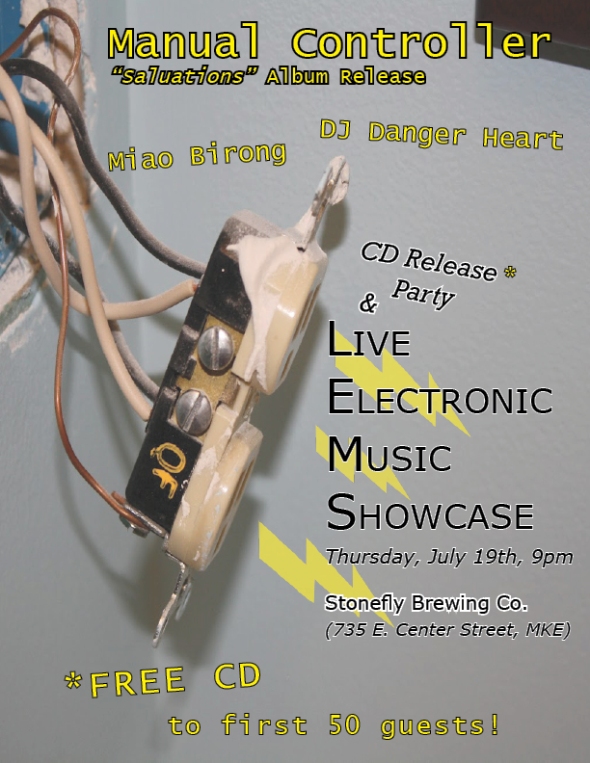