The full blown quakes shaking the current discourse surrounding Niki Johnson’s Eggs Benedict, reached me as a mere tremor aftershock, a rumor of spectacular occurrence. I witnessed the aftermath of Johnson’s creatively seismic work during the day session of Gallery Night Spring 2013. Astounded, I expected to like the piece not to have my afternoon taken over by it.

Debra Brehmer, gladly spending some time with her patrons, candidly observed of Johnson’s piece a quality indescribably awe inspiring, a gestalt nearly impossible to render in contemporary art. Brehmer, Portrait Society Gallery’s Director, profoundly noted that the weaving technique Johnson used to ensnare Pope Benedict’s image mimics fine needle point work made so often from women’s hands; an irony for a woman’s craft to have created an irreverent iconic reference to an institution women have been so systematically subjugated within.

Depending on which side of Eggs Benedict pedestal display you approach from, you either feel duped or immediately captured. The portrait’s verso is exposed, revealing the tied medial regions and exposed openings of the many contraceptives. They are so carefully secured on the wire grid, in appearance, sloppy and awkward with no semblance of the intended likeness; a vestige of the personal made uncomfortably public. This window into Johnson’s artistic process demystifies the piece’s craft work, increasing its power.

Eggs Benedict by Niki Johnson on display at the Portrait Society Gallery, 2013

I stood with a couple hand fulls of people for much longer than you may traditionally imbibe an artwork, contemplating whether on a metaphysical level the Catholic church could oppose condoms as a mere object if not used for a contraceptive. Upon further deliberation, given that the portrait of Pope Emeritus Benedict referenced in Eggs Benedict originates from a group of press photos associated with his now infamous statement that condoms help spread AIDS in Africa, and the unequivocal prohibition of contraceptives of all forms in Catholic dogma, it is absolutely impossible to parse the medium from the message. In fact, in no more certain terms could the adage “The medium is the message” hold true.

The stage of Eggs Benedict will always be heightened by Pope Benedict’s historic resignation, an eerie stroke fate for Niki Johnson. I sincerely hope they meet someday in some realm. Johnson has put Eggs Benedict up for auction, with proceeds going to benefit AIDS research. The opening bid came in at $20 thousand.

Johnson’s Eggs Benedict secures a moment in art history for Milwaukee; the Portrait Society Gallery serving as the vessel to bring this piece into the art world internationally; April 19, 2013 its semi-official first public opening.

Rains drenched the week leading up to this spring’s Gallery Night in Milwaukee and a tornado warning. No worries there are plenty of great place to get stuck in the Third Ward tonight. Cohesion, would be the word that best describes what the Third Ward has achieved in the arts and entertainment lobe of its identity. A permanent scene has undoubtedly formed there to support the City’s high-end fine artists, its cornerstone sits on the intersection of Water and Buffalo Street at the Marshall Building.

Once an informal stash of professional artists and collectors, the building now supports an evolved and varied ecosystem of art and design disciplines.  Some are highly recognizable like Reginald Baylor/Plaid Tuba and the Portrait Society. Others like Katie Gingrass are synonymous with fine art galleries in Milwaukee. All of the residents of the Marshall Building deserve notoriety.

Spring Gallery Night 2013 at the Marshall Building will feature 26 studios and galleries spread about all 7 levels of the building, making it very nearly an informal Contemporary Art museum. One highly anticipated show in particular at the Portrait Society Gallery will feature Nikki Johnson’s Eggs Benedict, a pixelated portrait of Emeritus Pope Benedict made entirely of colored condoms.

Another effort to look forward to comes from recent resident Marlene Hecht Simmons who lower level gallery features her own original paintings ranging in style from pop to portrait to folk. Phil Saxon’s work is also displayed there, a mixed media set that distilled something potentially neo-movement-like.

Timothy Meyerring appears to have quite an experience formulating in his first floor space Timo Gallery. If you don’t like his paintings which is really hard to do, there should be a little revelry to go with them to keep you engaged too.

From the Bottom Up

In a wily move, the Coalition of Photographic Arts (CoPA) took over a traditional second floor office suite on upper Mason Street and turned it into a a multi-room gallery space for their 8th Annual Member’s Exhibition. CoPA, a contemporary photography guild, showcases and supports fine photographic arts of all styles. 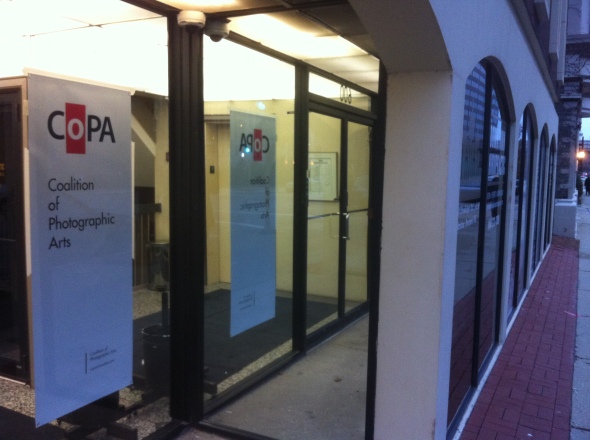 CoPA member Kelly Crandall expressed that CoPA exists to support the photographer community in the Milwaukee area, and although a membership organization, it is open to amateur and professional photographers. Crandall’s work for CoPA’s current exhibition focuses on landscape and street photography, much of her subject matter being people and architecture. With no less than 50 individual pieces on display from a couple dozen CoPA members, the photographic styles demonstrated encapsulate a wide variety of applications of the medium.

In this exhibition, classic portrait, landscape, and nature photographs accompany technologically driven examples of perspective, enhanced and digitally altered photography. Some less conventional styles like photographic canvas wraps can also be witnessed at the current CoPA exhibition. This will be truly one of the most diverse photography exhibitions around town.

Growing up, I had a shit kicking, High Life drinking, roof laying, neighbor next door. He was also the first person I ever saw grilling in the rain under an umbrella, with a beer can and Marlboro smoking in one hand, turning brats with a serving fork in the other.

Beside the yelling, cursing, racist propagating and abusive familial relating going-on year round, this family can claim my first best friend, my first video game football touchdown (on Atari 5200), and also my appreciation for Bob Uecker’s voice crackling Brewer’s play-by-play through AM airwaves, and not surprisingly my taste for fried smelt.

Back then the crank nets would come out once a year, cast off of the McKinley Marina pier, snagging multitudes of mid sized bait fish. My neighbors would bequeath a 5 gallon bucket or so of smelt upon my family every summer.

Those days of smelt fishing on Milwaukee’s corner of Lake Michigan left long ago. Not to be forgotten, recently I noticed smelt popping up again in Pick N’ Save and even Whole Foods’ fresh seafood sections.

Get Ready to Play

I got a call from an old college buddy of mine, with a ticket to Brewer’s opening day 2013? I hadn’t been since I wasn’t supposed to be there legally boozing… An idea formed instantaneously. Needing only the occasion, I thought craftily to myself, “let the commiserating of old times begin!”

It’s like all the days at the Park that came before and all the days that will come after, this year the atmosphere spits crisp gusts of pre-spring air down on thousands of revelers in the mid-morning pale sun. Bumpers hold brews and bags of chips, buns and what-have-you fixings for the tailgating, my party’s got a special guest.

A hoard of headless smelt lay prone packed on top of each other, wrapped in a thin film of plastic and secured in stiff brown butcher shop wax paper. Unwrapped, they nonchalantly slide past each other looking for the nearest resistance to hold them from spilling everywhere.

Ten in the morning is too early for brats, and thats why these here smelt are here. Seasoned and ready the cast iron pan catches the match light flame, too hot for grill cooking, heating the oil to a boil. Old Bay’s and salt are already mixed in the cornmeal, waiting for the smelt to take a dip and shake. Prepped, the smelt go for a swim in the pan for a couple of minutes, out and ready to eat like fish french fries.

The commotion draws the attention of a few weathered tailgaters. They exclaim “Aw yeah, Smelt!” A new opening day tradition is born.

Yellow Corn Meal (I use the Quaker round container. You may have to pour a little out to make shake room)
Old Bay’s Seasoning
Table Salt