Cold rain deepened my resolve to visit the Grand Avenue Borders blow-out sale, a trip that I plotted and canceled several times. Who am I to separate the uncanny combination of books and rain? The partially burned out ‘O’ in the marquee sign atop the building also helped. Until Borders announced its closing  I never noticed, but since that point my fascination with the failing sign would not relent and in part prompted my want to take photos of downtown (along with the scenery on Michigan Avenue one night, which my camera couldn’t make look as cool as my eyes could).

A bit jostled by wind and spattered by inclement droplets, I opened the glass door guarding the entrance. The critters attracted by corporate carrion had done their worst already picking through many of the still pricey items, especially in the cafe where all of the chairs, tables, serving dishes and equipment sold at lower cost, except for the red coffee mugs going for $10 a piece. I move past the music section knowing that it is hopelessly retail, circling back when I realize the Plankington Avenue side of the store is void of media merchandise, with price tags on everything but the store windows and the bubbler.

The R&B section is closest to the aisle, since a lot of ‘urban’ music listeners have a hard time finding music suitable to their taste when they are shopping in high-end bookstores.  I take a quick once-over glance and I notice that apparently Mike Epps has an album out. I got a little closer and saw ‘Accepted Eclectic’ scribed on the simple cover layout. Damn, my fault Aceyalone I can’t blame you for re-releasing a terribly slept on effort. I held maps of Park City, UT and Washington D.C. I willingly swapped, keeping the Grand Canyon and 5-Borough Maps, so that I could save this album from further cd wasteland disgrace and stay on budget. Shame on me, I had not bought it earlier.

I ‘acquired’ the only Aceyalone album I own back in 2001 from the UW-Madison student government office boom box scratched-up cd pile, figuring it in place there only because of the Hip-Hop Conference that the campus used to host. It was a quality promo sampler with 7 full-length tracks from then recently released Accepted Eclectic (2000), A Book of Human Language (1998) and previous albums from beyond. His sound, somewhat missed placed for Leimert Park, goes against the grain of the stereotypical South Central Los Angeles environment that birthed it.

Aceyalone not shy about mentioning his stomping grounds, has a line in the song Accepted Eclectic “…down in Leimert Park hanging with the hooligans…” that rung recall in my head while I numbed my mind with The MTV “reality” show The Buried Life one night. The Buried Life dudes lamely went to Leimert Park trying to learn how to ‘Krump’ (a dance) to fulfill a bucket-list wish. They eventually received love from the Krump scene, but 1:45 – 4:20 of the episode were basically rather comical. I thought “…oh okay, that’s Leimert Park…”

To Aceyalone’s credit, time can’t age a great song. It’s somewhat bad form, but worth it to share a couple standout tracks that demonstrate why Aceyalone is the Furious Styles of the LA underground rap scene.

He further solidifies his status as a pioneer of West lyrical delivery in Project Blowed , with a classic pot shot at the Hieroglyphics MCs (Even though Tajai does recognize Aceyalone on a track during the same time period as Accepted Eclectic‘s release)

Aceyalone performed at SXSW this past Saturday, with DJ Babu, Alchemist and Oh No. A quality line up for one night under one roof, that no doubt upstaged Wu-Tang’s Thursday night performance. Although a tad bit harder, add Aceyalone to your oldies but newbies list usually reserved for A Tribe Called Quest and De La Soul.

I am a fan of the bricks and mortar bookstore but the Grand Avenue could use a better tenant anyway. Borders liquidation will likely continue until several UWM off campus housing units get a carpet transplant. I also saw a 3-gallon Kool-aid jug and a slow drip coffee maker still available.

A corridor of books leads to a small card table covered in plastic shopping bags. Two young women dressed for cold weather, kept company by an overflow of shopping bags sitting on the floor, busy their hands manipulating scissors to trim excess plastic into likable shapes. One of the two, Flannery Steffens, temporarily transplanted from New York, got this crazy idea to organize an activity not involving beer suds on a Saturday night at People’s Books Co-op.

Sparked by the recollection of a batiking project and the sight of numerous plastic bags hanging around, Steffens went looking for a clothes iron. Her theory would prove correct that, with a precise amount of heat, layers of bags fuse together to form a fairly durable and pliable fabric. Melting plastic bags allows desecration of corporate labels, no matter the weight and texture of the bag. The brand image is not completely destroyed however, it blends with the other colors and images printed on the other bag layers in a “new and improved” motif. A tad of alchemy helps the process along too. Id est, when in doubt experiment. 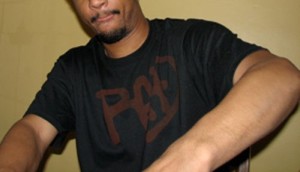 Steffens, now guided by her ambition as a playwright, admits to pursuing painting at one-point. Less about art and more about reuse, a night of creating also serves as a conduit to interacting with crafty people. People’s Books Co-op has a coziness that Steffens intends on sharing at other “Do-it-Together” functions.

Books do not always draw enthusiasm, but making things should. Just ask Elis, the Honduran who also stopped by the event. He plans to share this technique with his family that remained there, when he left 17 years ago. The discovery of an everyday use for fused bag material would deem Steffens an inventor of modern-day fire, in the world according to local lore.

In March, the next “Do-it-Together” session will take on old magazines, newspapers and what-have-yous, in a bout of collage making at People’s Books Co-op on East Locust Street.