With so many artists having musical aspirations blooming everywhere at every moment, there just isn’t enough time to give everyone their due. North Coast kid Madden Miles, just keeps lining up raw and unsung projects. He does what needs to be done, in this era of mega pop like me simpleton tunes, the projects just are. Madden Miles was cool enough to give me a few moments to talk music and his latest project #HeroMusic.

Local Trolley: #HeroMusic makes the third Madden Miles proper beat tape drop. The Candace Bailey (2012) and Kate Upton (2013) tapes actually played like instrumentals of EP albums to me, more so than beat tapes. #HeroMusic actually features vocal performances, what was behind that decision? You realize #HeroMusic is an actually a pretty damn good EP. You basically just produced half a legit album, f- a beat tape.

Madden Miles: #HeroMusic was a mix of a few things I had going on behind the scenes. I had a couple MCs and a vocalist that I really just wanted to branch out with. I’ve prided myself on being ‘conceptual’ and staying the course with my projects. I also wanted to make something that was sonically huge. I’ve been wanting to take a step away from sampling to see what I could brain storm and I’ve always felt like I could make something special with the right mix of people.

I have absolutely no qualms that we’ve achieved that and even more beyond what I thought could be measured. #HeroMusic has taught me a lot as far as engineering, mixing, and just keeping the straight path on remaining positive. It took a lot longer then I expected, but I’m extremely pleased and grateful to everyone who contributed, listened, and complimented on the quality of work. I genuinely appreciate it with all sincerity.

I also appreciate the subtle compliment of #HeroMusic. It was never meant to be a beat tape. I just always felt like 10 tracks is a great balance of work. I could’ve had 17-18 tracks on here but I felt it would imbalance the 10 solid tracks that were done. I didn’t want to risk polluting it.

LT:  I caught a little thread on the twitter, I wont name names but something about a hip-hop bracket. Heads were picking match ups between Drake and Wayne, Lupe was in there… Everybody knows hip-hop is about competition, you care to speak on the state of hip-hop from a competition stand point, where do you see things being at right now?

MM: The way I see it, if you’re in it to get money, then.. Get Money. I like everyone to an extent, but I also have my preferences. I will say I myself, am waiting for the next ‘it’ guy for all ‘hip-hop’ fans. I realize there’s commercial success to be had, and someone has to get that, I understand that absolutely. Instead of being bias as a hip-hop fan, all I’ll say is, if and when you get called on as a producer, make the most of the opportunity. You may not like who it is, or stand for what they rap about, but truthfully, 2013 made me realize, you can’t be picky unless you’re in a position to be picky. So stay humble, grounded, sincere, and work your ass off to get to that position to where you can be picky and choosy. I realize [that’s] more of a savvy answer…

LT:  I like that, it’s well suited. Seems to me among artists the competition factors is decreasing. Every now and then dudes will go at each other but most of now-a-days artists is playing by so many different rules, really the only comp is among fans. Speaking of competition, you went in the past 3 years at a long running producer battle hosted in Milwaukee and didn’t advance, take me from your first battle to now, how have you had to adjust your game?

MM: Battle one, that was an absolute wake up call, but it was awesome. I met a lot of awesome people that I still connect with to this day. I’ve never been what you’d title as a ‘battle producer’. I literally thought it was just go, play some beats, get some recognition and face time, and go. Then I was on stage, and I didn’t know WHAT the hell was going on. I looked at a couple of my friends in the crowd like, what the hell am I into here!? It was so hilarious.

The battle scene has been great just to meet new people, stay connected, build, and get better sonically. There’s so many good producers that it’s criminal. I have much respect for all of the competitors and everyone involved in organizing it. It’s influenced me to just all around get better. All in all when it’s said and done, I’ve enjoyed every year doing it as much as the next.

I pushed the bar about 2 years ago by having Alida do some live strings for me while I performed live. That was awesome. I have something that I think is pretty dope lined up for this year if I’m in it. Never been done before. I can’t seem to get people from my city to go to Milwaukee to support, and that’s fine. I’m more excited about the challenge to gain a new audience… That’s the ultimate thrill I’m going for this year.

LT: Yeah the battle format does lend itself to being a popularity contest. The Mil can be hyper local too, same with most of these woods. I’m going to just get this out of the way and give you a well earned Milwaukee pass. Any funny stories about pulling #HeroMusic together?

MM: Not terribly funny stories… Just more, compelling things in my opinion. On a more comedic side, I can’t tell you how many times I scolded Keno to get me the vocals for Gwen Stacy Sh*t. He came through clutch though. Honestly, the best story that I have or give is literally that I just sent them all the beats in the most basic format. They all performed what they did taking their own direction. I took that and stayed true to what the concept was, and catered to what they put down and their overall sound.

For instance, a good example would be Wanted:Heroes, I built that from the ground up. I had the beat, just bare piano, drums, breaks, and I went and recorded Amber. I was the only one that had the mix. All I did was tell everyone involved that was assigned a track what the concept was. They literally just gave me the pieces to the puzzle and I thrived on the challenge in placing it all as it came together.

I took about 3 to 4 months off from the project in it’s entirety because I was getting way too hands on and obsessive about everything. It needed to breathe and get a natural progression. By the time those months elapsed, I played what I was feeling. I was down and out at the time. I felt like I couldn’t finish it, wouldn’t finish it, and basically, not amount to anything as a producer, or life in that matter. It was an unbelievably hard time. But it rose me back from the dead, and as stereotypical as it sounds, it motivated me. I carried that motivation, and we cranked that shit out until it was done. I actually just listened to it on a drive and I am unbelievably happy and still so proud of everyone and happy that we could all do this. I absolutely love it.

LT: I’m not surprised to hear that artists just gravitated to your sounds without much direction. What I like most about your work is that it’s not very loop reliant. You got a hell of mixture of track themes, and the lyricist and vocalist are turned up.

MM: I appreciate the knowledge and understanding that I’m not entirely just predicated off of loops. Obviously, a loop drives the general feel of the track, but I’ve also had some awesome people guiding me, believing in me, driving me, and developing me to get away from that.

At times it’s beyond frustrating because you wonder if you’re ever going to meet the expectations that are made for you, but in retrospect, it’s all part of the growth. Like any producer, I definitely just started with a loop and just let it ride. It’s also hard because I have a lot of beats that may not even see the light of day because their victim of being too musical maybe. Too much going on, when maybe I needed to tone or scale back some of the intensity. I’m still learning but I feel like I’m getting there more sooner than later.

LT: You have unparallelled humbleness bro, #HeroMusic and everyone on it is quality, skull candy crush. I mean you got thoughtful tracks, philosophic, swaggin, grimy and that Born Infinite piece is just throw back hard. What do you think sets you apart most from other producers?

MM: I don’t know what sets me apart to be honest. Like I said, there’s just so many damn good producers. I’d say work ethic but I don’t want to because I know there’s others that work just as hard. I try to be out of the box with my concepts as much as possible. I try to do every kind of beat there is based on [the current] industry standards. My heart stays in the boom bap, grimy sample, dirty drums, heavy sound. However, in order to stand out, I look at artists like Just Blaze, Kanye, Pharrell, Timbaland, they wear so many hats and can make something different and unique and you still ‘know’ who’s behind that beat. That’s the crowd that someday, I reach to be mentioned in the same breath as…

LT: Pharrel killed the hat game over the winter. That was a vintage bored reaction. The Smokey the Bear joint? For real though… For real, for real  you brought up a interesting point though earlier about Racine not necessarily branching out to the Mil a ton, I’m going to extend that to places like Madison, Kenosha… The Mil don’t really branch out that much either, but now with the Mil going big at SxSW… Your thoughts on how that might change the game for whats possible for small markets if not through collaboration or through just getting out there dolo…

MM: I wasn’t able to attend, but I seen enough people that I know that were there and I felt like it gave me a good perspective. They’re hungry man, and again, that’s a testament to them. Go be heard. Don’t wait for it to come to you. I love seeing what people like Klassik, Unifi, Blax, Yodot, and Proph are doing to grow. I hope nothing for the best for those guys and look forward to hopefully working with all of them soon.

MM: I hope any and everyone is able to at least give #HeroMusic the 34 minutes it earned… I wanted to make a piece of art, not an album. It’s not a record to me as much as it is a soundtrack. I can’t thank the people involved enough and can’t wait to do the second part of the series. #VillainMusic. If you digging it definitely connect with Madden Miles on facebook and twitter @MaddenMiles. I appreciate the reach out and hope all is well with you and yours.

LT: #VillianMusic without a doubt… you got rare ear for sound and song structure so glad someone is pushing that envelope… 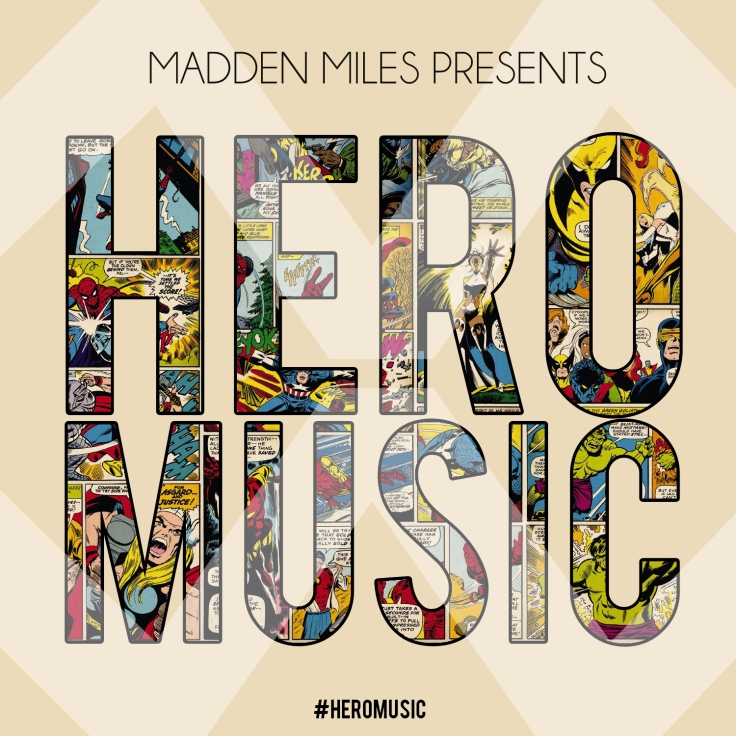