The restaurant sat empty otherwise. Bruce (Tom Forshee) waits nervously at a table going through his mental rolodex of personal ineptitudes. He’s joined in due time by Prudence (Bailey Haag) similarly disoriented by her foray into the dating game. They’ve been brought together by the precursor to internet chat rooms, the borderline maligned – personal advertisement.

They fidget. Bruce desperately tries to live up to his personal byline, ‘white male, 30-35, into rock music…’ He frequently shows his knack for finding the most direct path to oblivion, moving seamlessly from left field, to crude, to presumptuous in his conversation pieces.

Prudence, trailing close behind his awkwardness, admits to “never” frequenting the last columns of the newspaper’s classified ads. Prudence helps Bruce fill in his blanks during this most basic introduction, generously stretching Bruce’s mere presence to suit her psychological needs. The restaurant’s server never showed up. Maybe he knew this date would end poorly and that they would both end up with their shrinks.

Beyond Therapy, written by Christopher Durang, reads as a period piece about a time long ago in New York City, USA. A time and place when today’s most controversial social issues of gender equity, sexuality and morality among people had no tabs to settle. People did what they wanted and other people dealt with it, good, bad and indifferent alike.

Surely a satire when Durang originally scribed it, somehow today the story reclaims salience 40 years on, as baby boomers get amnesia and force the younger generations to rehash and normalize social taboos that could have long been done away with. This play relentlessly unleashes unruly and sarcastic dialog that will make anyone with a “P-C” gauge or a sense of aristocratic propriety bristle, cough and squirm. Looking for dry, crass, insinuating and insulting raucous comedy, Beyond Therapy has you covered.

Stuart (Derek Jacobs) opens his office to Prudence’s mercurial huffiness. He sets the mood for disclosure with some low-tempo instrumental disco. This session deteriorates quickly as we find out the “Dr.” has seduced sweet n’ sour Prudence after her second visit. She’s trying to talk out her dating troubles. He’s trying to keep the window open for more enhanced therapy. In doing so he opens the door for merciless exposure of his insecurities over his libido.

Meanwhile, Bruce confides in his counselor Charlotte (Maggie Worth) that he messed up a chance for true love by suggesting to Prudence his lover Bob (Jeff McMahon) live above the garage in their new life that Prudence doesn’t know about yet. Bruce’s confession might have proved fairly easy to overcome had Bruce not cried repeatedly on their date. Charlotte’s answer to get Bruce’s mojo back? A bolder and brasher personal ad. 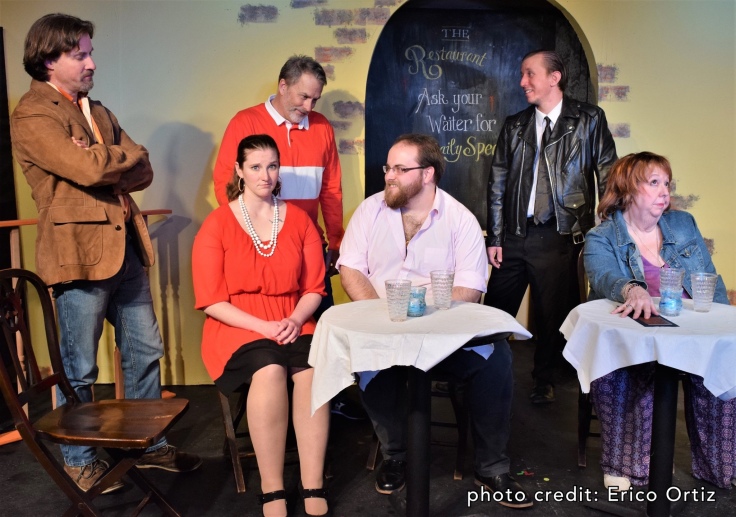 Now a bit taller and a fan of Joan Didion, Bruce arrives back at the the restaurant looking for female love and someone to procreate with. Somehow unable to resist this prose, for a second time in her life Prudence arrives at an empty restaurant plus Bruce, convinced she will meet her dreamboat.

She and Bruce unwittingly fumble through a second date, grating on each other while ironically getting closer and closer to finding common ground. This time, everyone is invited.

Elizabeth Havican directed Village Playhouse’s production of Beyond Therapy, squeezing everything she could out of her resources and cast. Even the ambitious scene changes, as clunky as they got, worked in the show’s favor. If you catch the wave of Durang’s humor, you’ll find plenty to chuckle at.

Beyond Therapy runs through February 23rd with Friday and Saturday evening shows at 7:30pm and Sunday matinees at 2p. Village Playhouse is located at 1500 S. 73rd Street, 53204 (just East of 76th and Orchard in West Allis).