I used to have this awfully bad attitude like most teens, especially toward popular media, and for some reason it extended to books of literature. I used to rant about how anyone could just start writing, making up any old thoughts and pass them off as facts or novels. Around this time, this newspaper started appearing in the halls of my high school.

It was filled with all sorts of non-sense like Air Jesus coming back to earth dunking in a Bulls jersey, commentary written under the pseudonyms like Smooth B, Jim Anchower and Higalec of the Healfdanes, and some classic spots like Point/Counter Point. It was foundational material emulate, fertilizer for a generation of native Milwaukeeans with a natural penchant for imaginative banter and hyperbolic heckling coursing through their veins. Milwaukee is of course the ancestral home of Jim Abrahams, Jerry and David Zucker, could anyone expect less.

One day buried, on page 5 or something, a random throw away column appeared, “New Study: Books Don’t Take You Anywhere”. In disbelief, my eyes swirled in a self-righteously justified tizzy at the mundane black and white picture of a 9 year old sitting in an over sized living room easy chair reading a book. That was the moment the The Onion played my chord, I was hooked.

At year close Milwaukee abruptly lost a dear smelly old friend. The day it was announced that The Onion print edition was going away should grudgingly join that club of infamous, tragic and otherwise note worthy moments in popular history deserving of a “where were you when…” recollections. It was almost two months ago now when I first heard the news and I’ve already almost forgotten mine.

I’m pretty sure I saw a status come through the A.V. Club Milwaukee page and immediately dismissed it as “usual antics”. About a week later, I was driving down Prospect Avenue while texting and listening to The Disclaimer on WMSE, which included then A.V. Club Milwaukee editor Matt Wild, where the gory details were revealed.

Somewhere along the line, some bastards in Chicago thought Milwaukee shouldn’t have a newspaper it helped bring to national prominence over the previous quarter century, circulating weekly on newsstands with the admirable A.V. Club Milwaukee local insert neatly tucked inside. It figures, we also have more bars per capita than Chicago, and naturally more cool stuff going on per capita too.

According to Wild , the Milwaukee outfit was still profitable, albeit likely on the curvy mounds about the ladies and gents in the Silk and chatline ads, profitable non-the-less (not a directly attributable sentiment of Wild). It is unknown if the same could be said in Madison, Boulder or any other of the cities The Onion phenomenon burrowed underground, later to be snatched up and tossed at a skateboarder.

Let us then remember The Onion as a true beacon of the oft’ hidden reality found in the sarcasm of cynical minds. A life line for the consciousness of free and critical thinkers to cling, a boil on the face of overcooked established journalism. The Onion: a testament to the vast potential contained in the sprig of an idea. To the A.V Club Milwaukee, a persistent tap on the side of the head to remind us that the local voice matters, and that their is always a reason to slug some Lakefront pints with your esteemed colleagues in the Onion Beer Society.

The Onion, a crowning contribution of Milwaukee to the patronage of cultural and political satire, one of the first and the last to circulate this Grade “A” American institution: The Onion print edition, gone but never to be erased from memory, at least not in the first two weeks of 2014. 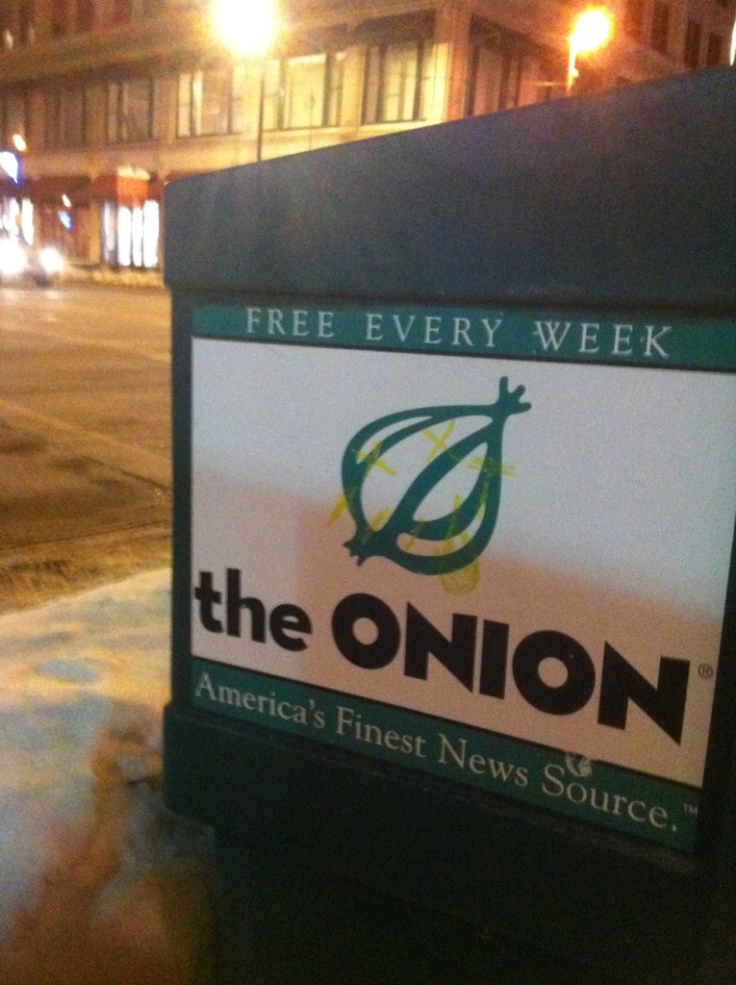 One thought on “One last thing 2013, R.I.P The Onion Print Edition and A.V. Club Milwaukee”