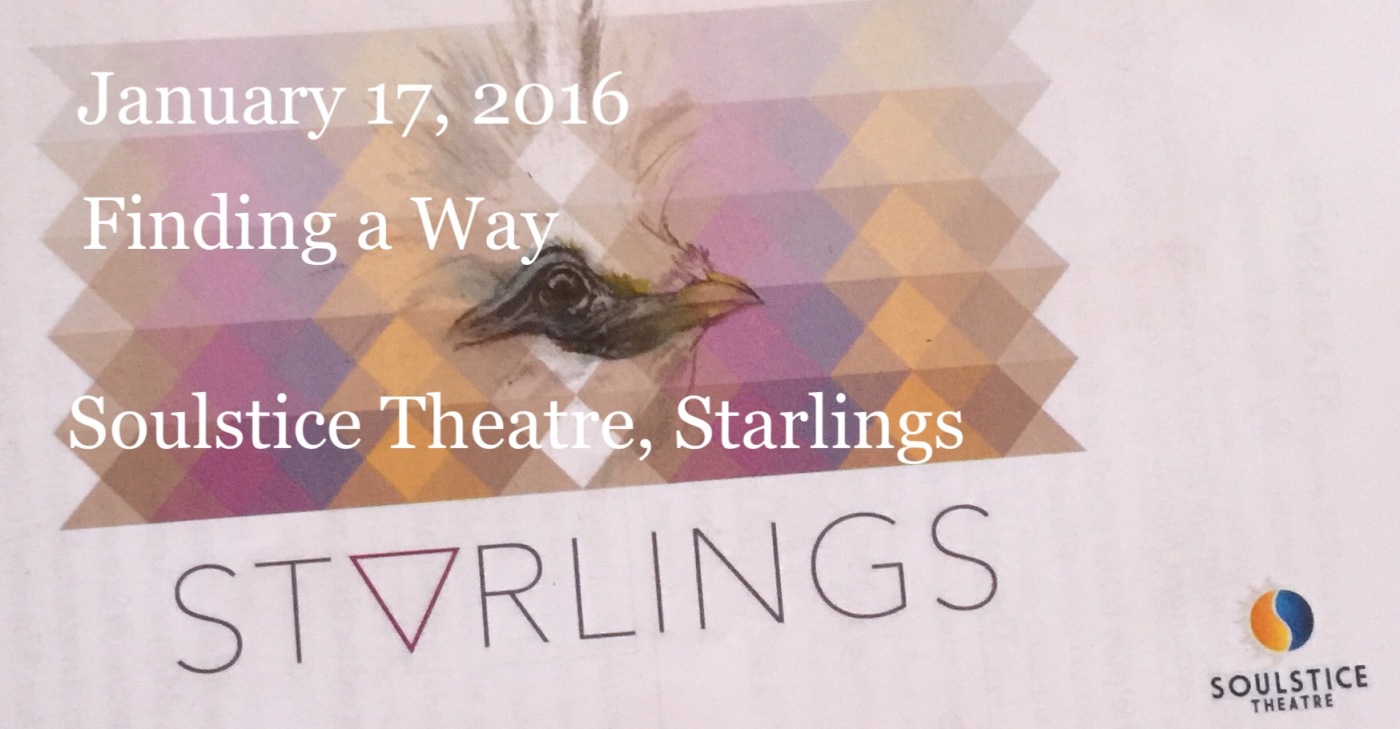 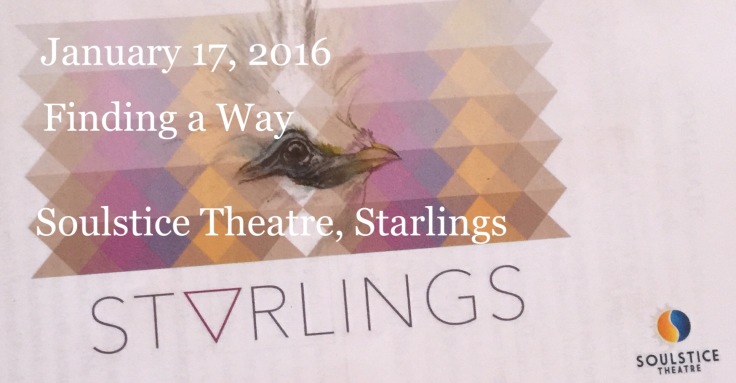 Emotions, idiosyncratic banter, control complexes, convoluted personal mythology, rationalizations, self-mutalizations, self-righteousness, conspicuous social cause pandering, psychodramas, endless searches for belonging, all these appear in the characterization of of a long lost group of friends, testing the moral and intellectual compasses of the audience from start to finale. Starlings brilliantly constructs a story of the sloppy terrain human existence dredges  in America; one tough mudder of a psychic death race.

The story has several foci. One of immediate interest thrusts Neal  (Ben Parman) into view, a tragically conflicted, yet extraordinarily lucid being. He and his life long friend Matt (Claudio Parrone Jr.) just checked into a Chicago hotel for a conference, a gay Christian conference. A reunion of sorts, their high school friend Kelly (Shannon Nettersheim) arrives at their room as planned, and shortly there after a co-worker of her’s  Deante (Amante T. Grey) arrives, unplanned. She’s invited him unexpectedly as a courtesy.

Deante, after relatively short introductions to Neal and Matt, finds himself swiftly engulfed by Neal’s cyclone of drama. Neal’s words nip pieces of Deante’s flesh precisely, although Neal frequently veers askew in discernment. Deante, likely just looking for a polite reprieve, excuses himself to retrieve proper accouterments for their refreshments. Matt, a natural maestro, has his own agenda to maintain, shepherding his peers fellowship in spiritual and worldly needs, sees himself off on an errand for the evenings food and drink.

In Deante’s absence, Kelly quickly explains to Neal that Deante has few friends and although he is heterosexual, believes in reaching out to others no matter their lifestyle. Neal seizes on this as a needless layering of pretense, and shaves the excessive growth to the bare earth, just in time to maintain momentary confidence of his supposition of Deante’s repressed sexuality with Kelly.

Matt and Deante return, the four of them verbally clawing and raking at each other, attempting to draw each other naked of whatever garments of self-styled dignity they proudly wear. Hell hasn’t broken loose yet though. Kelly slips in the conversation that her husband Ethan (Dave Sapiro) has made the trip with her, and will be stopping by their hotel room too. Neal and Matt know him as her oblivious abrasive ultra-conservative religious husband from another past they all thought they shared, all unaware of each other’s perils. They all fight hard to be redeemed.

An Ambitious Play for Lofty Thinking

Billed as a comedy “too Christian for the gay demographic, a too gay for the Christian demographic”, Starlings lives up to that expectation in many obvious ways. However, many other pieces of social commentary and exemplary literary convention arise through writer/actor Ben Parman’s work.

In the relationships of Neal, Matt and Kelly on a broader level we see the struggles of mainstream American social conventions put on the playing field , colliding with various corners of American society in ways reluctantly acknowledged in surface-level American consciousness. Starlings calls into question the pervasive and persistent pressures on people of a backgrounds to pursue lifestyles that mimic and maintain middle American “normal”, demanding everyone else to bend into place. All of “normal’s” requisite cultural sameness receives deposition: patriarchal, sports oriented, heterosexual, gender bound, Christian, entitled, self-righteous, ethnocentric, and intolerant misogyny,  all of it washed down with pizza and booze.

Neal, Matt and Kelly twist, contort, curl and brace themselves under the weight of these social expectations, in the present tense before our eyes. Little by little the deformities of growing up with these rose tinted expectations become visible. At one point, Neal goes round and round rationalizing his sexuality, explaining in frantic self-doubting manner his Christian dilemma of simultaneously causing the downfall of the Christian family, and being the result of the Christian family.

Matt having rode a scenic avenue to adulthood, upholds sections of “normal” around him like an imperfect armor comprised of self-assured male assertiveness, studded with aloof and coldly rational personality extrusions, succeeding often in projecting an image of unflappable inner resolve. Eventually he must examine himself under the light of stark realities about his past as Christian youth group leader that have been rehashed and laid in front of him through his rekindled friendships, long buried with the butterfly effect.

Wedged between societal expectations and her desire to experience a just world of reciprocal empathy, Kelly’s plight contains extraordinary complexity. She balances her feelings of loyalty, responsibility and moral compass like an unicycle acrobat balancing 77 tea set cups and saucers. Her base shakes with the pulls of each of the worlds she’s introduced in this scenario, her high school friends, her work acquaintance and her husband.

Another extraordinary aspect of this story is its willingness to confront the “norm” as represented by Neal, Matt, and Kelly with other uniquely American perspectives. We learn more about this “norm” from the perspective of Deante, who is a well-adjusted yet realistic African-American male character. He reasonably fits in with their strata intellectually, yet finds himself grounded enough in his own personal experience to speak his truth to them. The way Deante levies the flood of their “norm” leaves little question that he understands his identity and his place as an outsider in their world. His presence confronts their “norm” in ways they can’t possibly comprehend, they are too immersed to see beyond their own frame of reference without being patronizing.

In another episode during the gay Christian conference, Neal has an random interaction with another guest at the hotel, Carlos (Andres Ricardo Garuz), which leads to a whole different set of cultural clashes. Carlos, a Mexican-American, runs willingly into the storm contained within Neal’s personal dramas seeking to understand his own challenges using Neal’s eyes. Carlos stares at their reflections in a figurative mirror, side by side, to see if it looks different than what he has learned through his own socialization.

At one point in the night, another unlikely and understated encounter occurs when the delivery man (Robb T. Preseton), a young white male 20-something arrives with a pizza. Although potentially a stretch as far as his relevance to the grander themes this play potentially evokes, the pizza man’s quizzical response to even hearing a tidbit of Neal, Matt, Kelly, and Deante’s interactions, reveals that even his world has an orbit far from theirs.

Conveyed implicitly, these dynamics appear only through the dialogue and body language of the characters, represent only one of the many shades of outstanding play-writing and directing that shine through the production, making the audience giddy flies-on-the-wall during this two-act.

Directed by Erin Nicole Eggers,  Starlings represents everything contemporary theater should embrace: diversity, controversy, humor, and intelligence.  This script is extremely heady. Packed with pop and deeper cultural references, it is a story that might actually read well as a novel. You actually would need the script in front of you to catch all of the goodies flying off-book, unless you are a bar trivia level-difficult, Crimes Against Humanity guru.

The script is executed wonderfully up and down the playbill, Parman and Parrone holding center stage, and Nettersheim, Grey and Garuz solidly complimenting them wringing out their own personalities to make-way for believable characters to enter. Sapiro, who local theatre patrons have come to know as a solid lead actor, brings his usual magic to his tertiary role, a luxury not afforded to many productions.

There’s really no way to say more about the level of quality Parchman has achieved in his script. Performed, it is stuff to give Woody Allen or Albee a run for their money. Starlings has the rare combination of historically and social relevant content and storytelling that gives it a chance to travel beyond its opening world premier run at the Soulstice Theatre. Additional technical credits go to Dan Parman (set design), Therese Goode (sound design), and Kristie Cooper (graphic design).