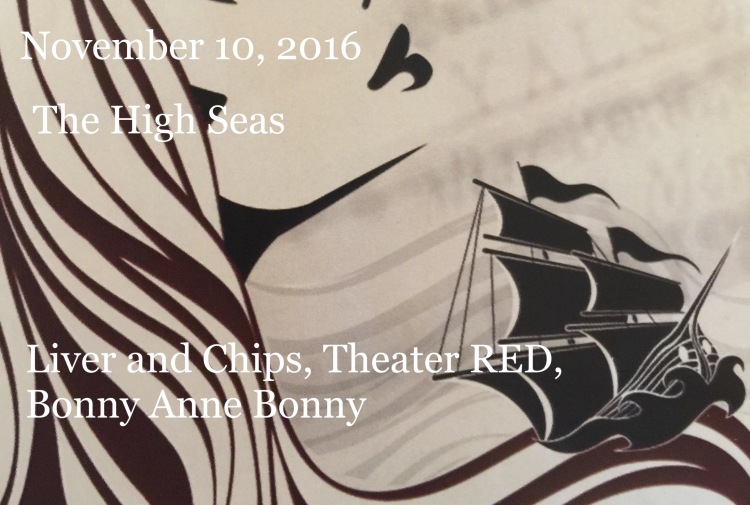 A jovial sneer reaches the corner of Anne Bonny’s mouth. A surly fellow known as Blackbeard, convincingly played by James Carrington, has unexpectedly encroached upon her flighty courtship of Calico Jack (Zach Thomas Woods). No strangers to trysts, Anne Bonny (Alicia Rice) and Blackbeard clearly had a thing going. In the present day, a little yelling would do. In the pirate days, a lover’s quarrel deserved a little more action, possibly swords, explosions and a stolen pirate ship?

Delightfully romping through a tale of love, lust, adventure, camaraderie, swashbuckling and deception, Theater RED’s premier of Bonny Anne Bonny, an original piece written by Liz Shipe and directed by Christopher Elst, treats theater goers to a fast-paced, witty and all around fun performance.

On the lam after her ship is blown up and en route to unfolding her latest plan, Anne Bonny is the hand from the past that knocks at Josiah Addams’ (Bryan Quinn) door asking for help. Josiah, known to Anne as ‘Biscuit’, tries to shield his niece Lila’s (Jessica Shultz) ears and youthful will from fulfilling her fantasy to live a pirate’s life. Lila naively jumps head long onto Anne’s coat tails. Having been forced into hearing the favor of this old friend, Josiah aides Anne Bonny in forming a rag tag crew, from a batch of wayward and not-so-seaworthy souls.

Little does Anne know, that a conniving and unscrupulous military officer Captain Presley (Thomas Sebald) has enlisted some of Anne’s past and recently earned enemies to end her run of petty outlaw pillage. Satisfied only with complete annihilation of Anne Bonny, Presley finds himself gleefully using every tool at his disposal, including jealousy that has seeped into Anne Bonny’s ranks.

All the while, Anne Bonny follows the course of her plan to nab enough riches to sail off the high seas of England for good. Wielding strength and cunning, Anne Bonny tries with every thread of her being to hold all the pieces of her tattered and frayed world together.

Anne’s adventures lead her to ‘Heartless’ Jane Bristow, a well-weathered and crude pub matron well-performed by the play’s author Liz Shipe. Heartless Jane’s establishment gets a lot of action and gives the perfect backdrop for some of the plays best action scenes.

Bonny Anne Bonny’s director Christopher Elst has made weapons and stage combat a signature element of many of Theater RED’s productions. He incorporates this element frequently and fittingly for a play about pirates. Fisticuffs, grappling and sword fighting settle impromptu disagreements throughout the play’s acts.

In other more intense situations, Lighting Designer Aaron Seigmann deftly nudges our imagination of fire and explosions. The scenic design of Christopher Kurtz gives it all a place to live, a multi-level modular design that allows wood, ropes and steel to become a functional pirate ship, able to withstand highly physical blocking and aerial elements.

Bonny Anne Bonny is packed with quip dialog, that melds low brow humor, double entendre, conventional wisdom, campy slap-stick humor and cynicism into a story that can be digested by nearly all ages without worry.

Now you're on the Trolley! View more posts